p.s. there’s a video to watch at the end!

Mark and a couple of mates (Tom & Jo) packed their bikes and the scooter and set off to “Las Alpujarras” in the Sierra Nevada mountains last season (yes I know, I’ve taken my time in writing this, but I only type with one finger). Here’s our report on the riding in the area. There is huge potential for trips to this area – watch this space!! 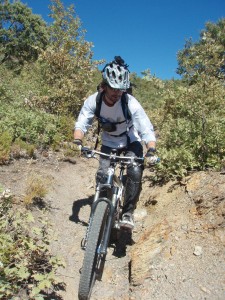 With the van heavily packed with three mountain bikes, overnight kit and the scooter (which took up most of our space), we set off from our base in Cordoba to the Sierra Nevada mountains, more specifically the Alpujarra region. 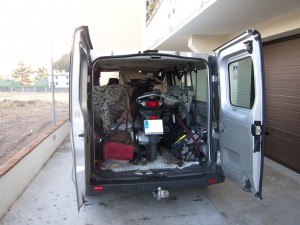 We stayed in a really cute, but basic, wooden cabin which served our purposes well – because let’s face it, most of our time was going to be spent out on the bike. We dumped all our kit including the scooter, which was going to be essential for collecting the van at the end of the day. We then drove up the mountain as far as the road would allow. We had about an hours worth of climbing from this point, but plenty more descending would be our reward! 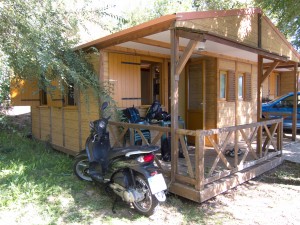 Cabin in the woods

Once we had located the start of the first descent, we padded up, got some fuel on board and then set off down the trail. This was a fast swooping trail with plenty of loose rocks and lots of dust! It was awesome – with a few surprises thrown in for good measure! Check out the video at the end of this post to get a better idea of the trails… 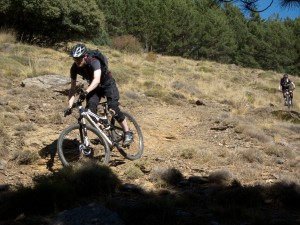 Tom and Jo take on the trails in Sierra Nevada

We eventually descended into the first village of the day, where we were able to stock up on water from one of the local springs. We then had a short, but very hot climb up to our next bit of single track, which finally dropped us all the way into the bottom of the valley. This, unfortunately means we had a bit of a climb back up to the hut, where the scooter was waiting! Thankfully I didn’t have to ride all the way up and collect the van! That wouldn’t have been a nice finish to the day.

We’re all fairly tired by the time we get back. It’s been a hot day, but as the sun is setting the air temperature starts to cool rapidly. Once the van is back, we crack open some beers, prepare food and start to talk our way through all the trails we rode that day, excited at the prospect of more the following day! 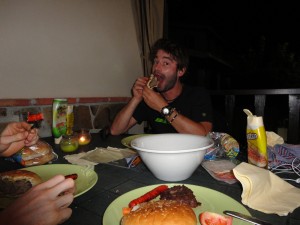 It ends up being a late night chatting, drinking, eating and watching the stars – thankfully I had my down jacket with me, as it got fairly cold so high up in the mountains. 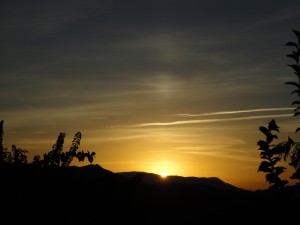 The following morning we were rewarded with an amazing sunrise! Bathing the mountains in a crisp, fresh light – what better way to start a days riding.

Todays ride consisted of a hike a bike climb out of Travelez (the highest village in mainland Spain) – and when I say hike a bike, I didn’t take into account Tom’s determination to try riding as much of the route as possible! That lad is like a mountain goat!!

Once we finally hit the top we took some time out to make lunch and get a few photos of the amazing views. We were then rewarded with an amazing, flowing descent – full of whoops and cheers! 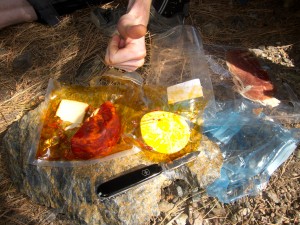 A short road climb out of the next village quickly rewarded us with a slightly more technical and enclosed descent, which finished with some fairly tight, but doable switchbacks. 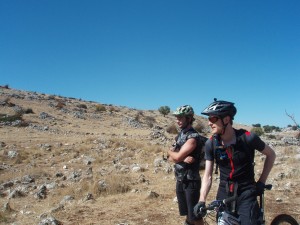 We only really took photo when were resting!

A slightly longer climb took us to the final descent of the day – but this wasn’t a descent to take lightly! With super tight switchbacks and perilous drops, there wasn’t much room for error here! We rode the ones we felt comfortable on, but with tiredness setting in (as well as getting a sudden appreciation for staying alive) we didn’t quite take them all on…

Having spat us out at the bottom of a steep valley, the end of the days riding was therefore finishing with a rather energy sapping hike-a-bike out again. Back to the van for a wipe down shower and change before heading back home to the Subbetica – where we would be taking on Grande Cojones the following day (which was very technical and rocky in comparison to the last couple of days – but with less of the death defying drops!). 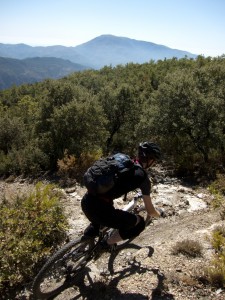 All in all, Sierra Nevada was an awesome place to go for a change of scenery. It’s not for the light hearted or those with a genuine fear of heights. But there are also some super flowing, relatively smooth trails to enjoy by most intermediate+ riders. Obviously there are many more technical options for the more advanced riders.

← Packing a mountain bike for air travel – How to
Bontrager 24/12 – 2013 →
We use cookies to ensure that we give you the best experience on our website. If you continue to use joy-riders.com we assume that you are happy with this.Ok