Well I’ve just about recovered from what was a superb Mountain Mayhem. It’s taken me all week to catch up on the sleep and I’ve had the appetite of a horse. It was a weekend to remember with unusual blue skies and sunshine, the only rain falling on the Friday afternoon to dampen the course for our practice lap. After that the weather got better and better becoming a scorcher on the Sunday making a super fast and dusty course!

For those who haven’t heard of Mountain Mayhem, it’s a 24hr race around the grounds of Eastnor Castle in the Malverns. Soloists (nutters), teams of 4, mixed 5s or 10s race around a 9 mile lap in a relay style event, the winner being the team who has completed the most laps at the end of the 24 hours. It’s an extremeley popular event with what seems like the whole bike industry turning up. There are 2500 racers entered making up about 500 teams.

But it’s more than just a race, there are demo bikes there, trade stands and plenty of things to look at and have a go at in the main arena. It has a real family friendly atmosphere too with kids races on the Saturday. It’s not just XC racers who do it either, there are all sorts; Scooby Doo was racing, there were guys in unicycles and the retro bike teams who were riding bikes from the dawn of mountain biking! For me, the best part is the atmosphere and how everyone cheers each other on. One group of supporters were giving chocolates to all the soloists going past, and some were even giving out cups of beer! A good motivation to get round for another lap I’m sure!

I was entered in a mixed team of 5 with my biking mates and my girlfriend who were all Mayhem virgins who I’d promised a fun weekend of racing with chilled camping and a festival atmosphere! By the time we’d all done a race lap of the course I’m not sure they were convinced as it was a bit of a killer with over 400m of climbing over the 9 mile lap! There was however some brilliant singletrack as reward and I have to say, I’d go and ride that trail again anyday because at speed it was a lot of fun, helped by being baked dry and dusty.

The race started at 2pm on Saturday with a Le Mans style dash, erm, sprint for 3/4 mile to spread the field out. I got a good start and came through to the bike collection area in amongst some of the pro teams. This could have been an error because it made for a very fast and frantic first lap. I gave it some beans and came in 27th at the end of lap 1. Everyone went for it on their first lap, getting caught up in the atmosphere and with fresh legs. But this is a endurance event so it was now time to settle in for the long haul!

Along came the night laps following an amazing sunset. Racing through the tight twisty woodland singletrack at night was a blast. Getting up at 3am to go and race wasn’t! By day break we were on the homeward straight and despite tired legs we all put in quick laps in the morning. I was dreading my last lap after cramping on the previous but some newfound energy and knowing it was my last meant I could push on the climbs and let it out on the decents. We completed 23 laps in total, coming 20th of 112 teams in the Sport Mixed category. A result we’re pretty proud of considering our laid back approach to the weekend.

Will we enter again next year? I’m not sure, it isn’t easy but as memories of the tiredness and pain fade it leaves those of a festival atmosphere, camping with your mates and riding in the sun. I wouldn’t be suprised if we go back! 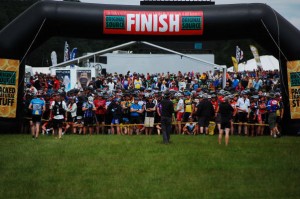 Lined up for the start 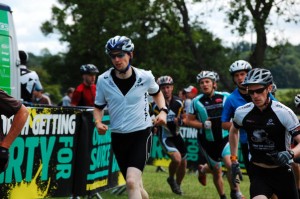 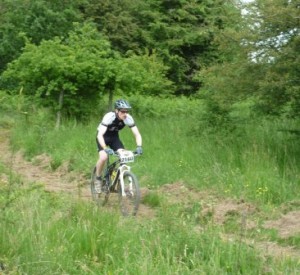